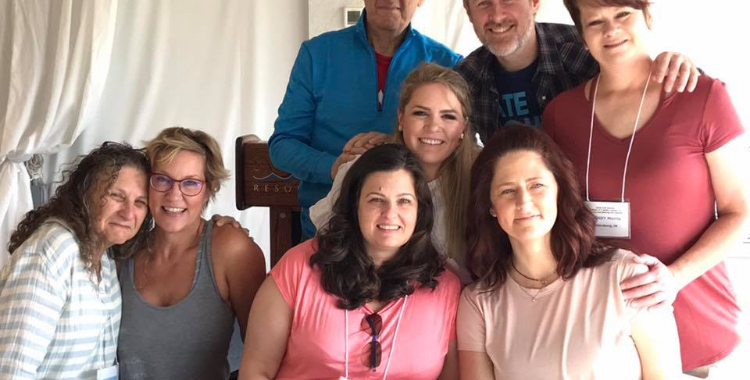 by Francie FrisbiePosted on September 5, 2018October 28, 2018
Posted in Lifestyle

The weekend of oct 5,6,7, I attended the CUB (Concerned United Birthparent) retreat in Clearwater Florida.

What an amazing weekend it truly was. I got a chance to meet some amazing birthmothers and adoptees. It was truly the opportunity of a lifetime that i am so thankful for. The women of CUB have worked so hard for so many years to change the face of adoption, expose unethical adoption practices, and support of birthmother and adoptee rights. I’m going to give a little overview of the weekend.

The retreat opened with, Ann Fessler’s short film: “A Girl Like Her”. If you have not seen this film, its amazing, and something you should definitely check out. Ann has taken imagery and videos shot around the time of the baby scoop era, images that portrayed perfection and the white picket fence type of life, and played the voices of birthmothers and what was really going on at the time that history does not want to show. The bravery of these birthmothers to come forward and share their stories of a time when they were at their most vulnerable and were preyed on by adoption agencies that coerced them, and in most cases gave them no choice but to surrender their children. The movie was incredibly moving, and resulted in many emotional reactions from all those in attendance.

Then, Anne spoke about the conservative right pro-life movement, and how they have set up pregnancy centers that have no formal medical training, to lure mothers toward the choice of adoption. Ever seen billboards with a woman looking upset that read “scared? pregnant? don’t know what to do?” these are marketing ploys by christian “pregnancy centers”. These centers often “offer” counseling and medical services to pregnant women in crisis. Often the people working at these centers do not have medical training, and use coercion methods to get these mothers to surrender their children. I was really amazed by this. so many times i had seen these billboards, advertisements, and not understood what was really behind them. It was truly eye opening that unethical practices in adoption that occurred not just in the baby scoop era, it is something that is still happening to this day. Many of these “pregnancy centers” co-locate near legitimate pregnancy and women health services centers like planned parenthood, hoping to confuse women and bring more vulnerable women into their clinic. These christian clinics use persuasive advertising techniques like only showing beautiful young women, showing the center being their to help them with their “choices”. What they don’t see is that most women placing their children for adoption today are older, sometimes married women who are already parenting children. These agencies only show women who are happy with their choice of an adoption plan, not women who have decided to parent, or women who come to regret their decision to place.

Next, Renee Gelin, the co-founder and President of Saving out Sisters spoke. I was incredibly moved by hearing her speak. Renee is a first mother who surrendered her son to adoption in 2011, she was already a mother who was in a crisis pregnancy situation, her lack of resources and support lead her to seek the counsel and support of these “pregnancy centers”. Lack of information led to her decision to place, which, afterwords she realized was a permanent solution to a temporary problem. Renee co founded the organization Saving Our Sisters, an organization that gives unbiased education about the choices women have when dealing with crisis pregnancy. Saving Our Sisters offers these women help and support in the decision of keeping and raising their children. Her work with hundreds of women who were initially target by adoption agencies, has resulted in the preservation of many families, and stoped what would have been unnecessary adoptions. I am in such awe of women like Renee, who use their experience and knowledge to save other women and families from having to face what she has gone through. As a mother myself, i cannot even imagine being put in this situation. She is so brave to stand up, tell her story, in hopes of helping others.

Next Macy Oosthuizen spoke about development and attachment. Macy is an adoptee who became a mental health professional, and focus’ on relationships in families and among members of the adoption constellation. She discussed the different stages of attachment throughout a childs life, from birth to 18 years old. She explained that this is mainly guided along trust vs mistrust, and that the outcome of each stage builds on the next stage and how a person will develop their own attachment. Macy played a short video that was so powerful and demonstrated what happens to a baby when their needs are not met, they are not interacted with, and their communication is not mirrored by a caregiver. In the video it shows a baby interacting with its mother. The mother imitates the sounds the baby makes, looks to where the baby points, reaches out to the baby when the baby does “grabby hands” for affection. Then, for two minutes the mother becomes stoic. She does not smile, nor does she interact with the child at all. Very quickly the child becomes upset, uncomfortable, starts crying moving about, turning his head, trying to engage his mother who is not responding. It was truly eye opening to see how upset a child gets after only two minutes of not receiving any interaction with its caregiver, it was a visual image showing how easily trust and attachment are affected in infants, and how this is something all adoptees have had to face.

One of my favorite parts of this retreat was the support groups that met before dinner. I was obviously in the adoptee support group, lol. It was really the first time i had ever sat with adoptees, told my story, and connected with others on the shared experience of being an adoptee. I feel a deep connection with all the adoptees that attended this retreat; many of them having been in the adoption advocacy world much longer, but who were so willing to open their hearts to a newcomer like me. Each one of their stories were so unique and their individual healing journeys so inspiring. I heard DMC say it once, we adoptees are the true real life super heros. In the face of adversity, we rise. Just like batman, spider man, we lost our families of origin; but we did not sit in our pain and sorrow, we used it as a calling to help others. It was amazing to talk to those who really got it, no explanation necessary. It almost moves me to tears the love i have been shown, these are some truly amazing, strong, and courageous people. People i hope to see again and again over the years as we continue our advocacy and healing journeys. i am so grateful to have met each and every one of them.

On the second day we heard Historian Rickie Solinger speak about reproductive justice and adoption. She spoke about how adoption links with many other social justice issues. It, at times, takes advantage of those who are vulnerable, and social justice centers around those who are vulnerable due to their life circumstances. Adoption was a societal solution during the baby scoop era, and by making abortion illegal, it led to more white babies being available to white families who struggle with infertility. As single motherhood has become more acceptable in this country, adopters are looking to foreign adoption to fill that void. We also heard Liz Latty and Karen Smith Rotabi discuss reproductive health and forced family separations. They spoke about what is going on in South American countries, and how the most vulnerable countries (Guatemala, El Salvador, and Honduras), have been taken advantage of by adoption agencies. Americans ignorantly think that just because we are bringing these children to America, and that we are so much better, have more money- doesn’t make it better, or actually give someone a better life.

By this point in the weekend, I’d say everyone was a little emotionally overloaded. So support group was not as big, and most people took a break until dinner. After dinner we went back to the conference room to watch Living Mirror Playback theater. This was an interactive form of improvisational theater that draws on the stories of those in the audience. They would invite someone on the stage and ask them a series of questions and what they would like to see acted out. Many of the women were birthmothers, and they went back to a time when they lost their child, and some spoke about when they finally reunited with the child they placed. It was very moving for everyone in the audience. Many of the women at CUB have been working and fighting for the rights of women, birthmothers and adoptees for decades. I could tell many of them have felt defeated by the current political climate, which is understandable. I think its hard to always tell have far you have come when its been a long slow journey. But, I want to let those women know- they have moved mountains. I would not be sitting here today being able to start a podcast discussing OPENLY the realities of adoption. There was no such thing as CUB till they formed it, and have run it for decades, touching thousands of lives. I saw in peoples eyes connection, and relief to have somewhere to share and have their feelings validated. A safe place for such a hard thing to discuss with those not affected by adoption. They have fought for womens rights, helping women have access to reproductive health and support resources to single parent a child. They have fought so women have a choice- and lets think about what that choice allows for us. But I do think, things are getting better. I think people are becoming more interested in shared experience. With the Me Too movement, womens rights continue. It was a weekend I’ll never forget, and which I hope to attend again next year.